AS WE WRITE THIS SECOND ANNUAL LETTER IT IS -40 DEGREES WITH -58 WIND CHILLS! 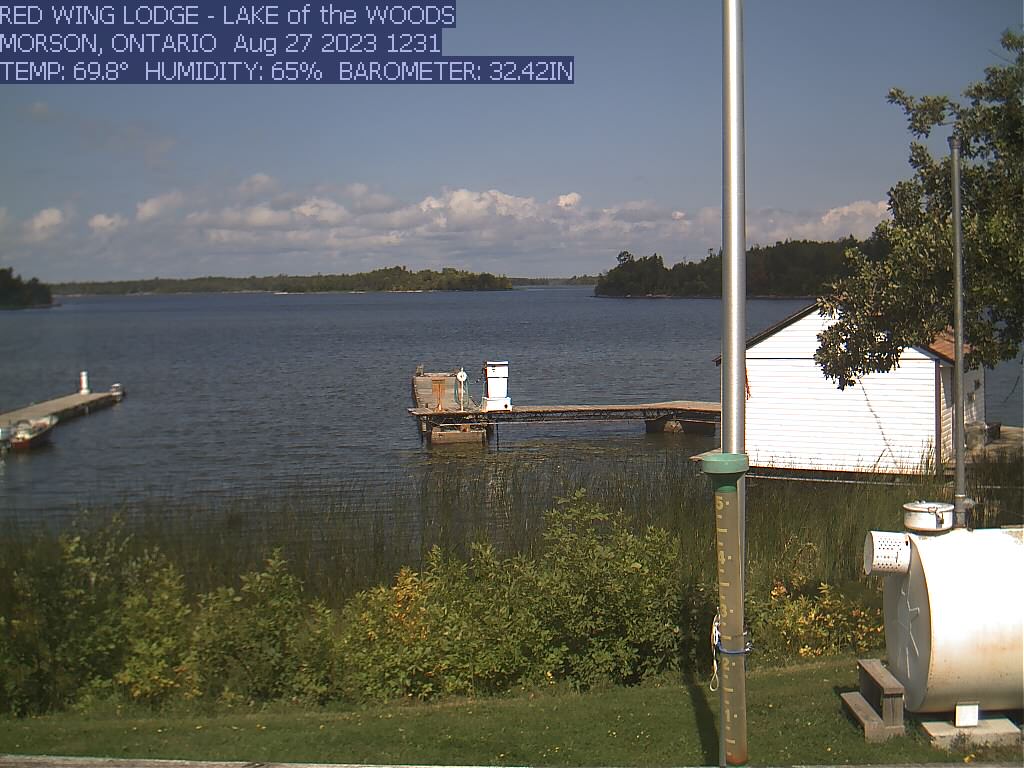 The 2013 season started off with a very late spring, cool temperatures and a very late ice out. The bay did not open until May 7th. Our web cam (View web cam and thermometer) has been working, for the most part, flawlessly. We have hundreds of people each day checking the current conditions here on the web cam. We are currently developing a new web site with more information, like this letter. We will have more current and historical pictures. Please bear with us during the new web site construction.

The end of May found us without the help of Mike’s right hand man, Lennie. Lennie fell in the shower and broke 4 ribs. He was off work the whole month of June which was quite busy. Mike and Anne were able to handle the load of work Lennie normally takes care of. Anne put in most of her time mowing, sometimes 2-3 times on the same day, mowing the same part of the yard over and over! When Anne was not mowing she was fishing off the dock! She caught 4 Muskie off the dock and appreciated all who helped her release these fish! Molly and Kate were not around to help this summer very much, as they both found jobs in town.

The fishing was exceptional in late May and early June considering the late ice out. We had a couple from Spirit Lake, Iowa the week of June 8th that caught hundreds of walleye near No Name Island. It was their first time here, so they did not go far from camp, one drizzly evening they caught 35 walleye in less than 2 hours! The Ferguson brothers caught 44 small mouth one day in early June! They averaged over 30 per day all week. We had some very large Northern caught this year with many over the elusive 40” length. In July, Noah Jacobson, 8 years old, caught a 50” Muskie! While fishing off the dock in September, Anne caught a 40” Muskie!

August was very busy with the North Metro/ Twin City chapters of Muskie Inc. holding their annual outing here at the lodge. This event has been going on for over 20 years. A BIG thank you to John Van Ingen and Pat Miller for organizing this again. They do a great job! There were 61 Muskies caught by the group on the outing. Total Muskies caught in camp for that week was 94!

This summer, (2014) Red Wing has been chosen by the Star of the North chapter of Muskie Inc. (for the third time in four years) to host the Muskie Inc. Chapter Challunge. This is an annual event for all the chapters in Muskie Inc. to gather for camaraderie and fish for a bronzed minnow bucket. Red Wing Lodge has helped host this tournament for an unprecedented 9 times. The chapter that wins the Lunge Bucket chooses where the Challunge will be held the following year. This means it could be held anywhere, in the USA or Canada and to think Red Wing Lodge has been chosen 9 times is truly an honor. 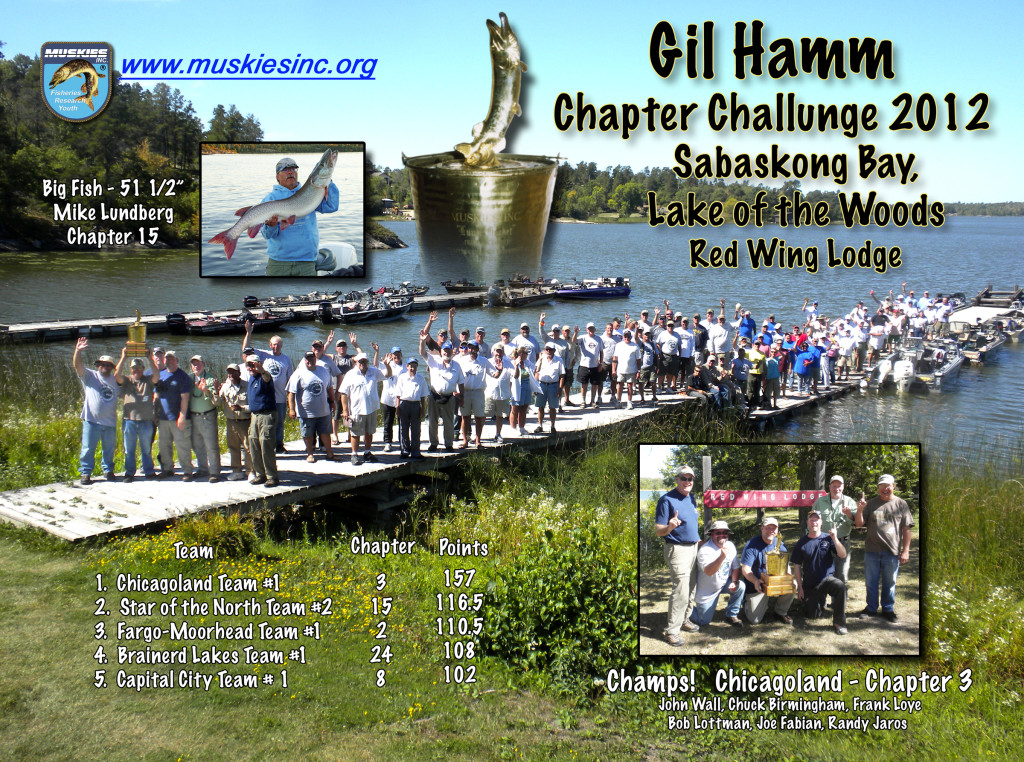 This is the centerfold spread from Muskies Inc. Magazine featuring the Chapter Challunge at Red Wing Lodge, click on the photo to enlarge.
Photo courtesy of Muskies Inc.

September was a month of preparing to lift cabin 3 and install new footings. Mike and Lennie worked on this and finished mid- October. All floating docks were taken out, motors stored and boats turned over. The main water system was drained and all the water lines blown out for the winter. Skirting was installed on the cabins used for late fall deer hunters. The hunt this year was very successful with as many as 15 deer hanging in the camp at one time. Mike worked closing things at the camp, then travelled to Matt’s to help him build a new garage. Between the camp, the garage and the wedding, October was very hectic.

We have celebrated one of two weddings in our family this year. Our son Matthew and his new wife Denise, were married October 5, 2013. Mike and Anne were graciously welcomed into Dave and Jan Beasley’s home for the wedding on Rainy Lake. The Beasley’s have a spectacular home and we thoroughly enjoyed the break from camp for the wedding. They are the parents of Matt’s best man Greg. Our daughter Molly and her fiance Riley, will be married in April of 2014. Kate is in her third year at Bemidji State.

This summer will be a landmark for Red Wing Lodge. It will be 50 years ago (1964) since my Dad, Ken, began the journey to build his dream. I was 11 years old at the time. My Mother, Betty, was behind him all the way. He started by staking out the land and bought a used chain saw at the marina. With a small generator, an axe and a lot of determination Ken hacked away at clearing the land for the first cabin. Things were not easy in those early days. There was no road, power or docks. All material and furnishings came in by boat, including the sand for the footings (brought in by sand bags) for the first 11 years. Ken established and launched the initiative to bring Hydro power to every cabin in our bay. Ken also provided the foresight to buy the road right of way from Highway 621, to build Red Wing Road, now a municipal road. This road gave most of our bay road access. These were monumental instruments to establish a business in this wilderness. Ken passed away in 1984. Betty passed away in 2011. Mike and Anne, (married in 1984), continue the family legacy and thoroughly enjoy all of our customers.

We want to thank all of our customers, especially the many regulars, who have been coming to Red Wing for 20-30+ YEARS! We would not be here without your support.

If you refer a new customer to come to Red … [more]